Visit to Portland, Maine Brings Back Memories—and Creates New Ones 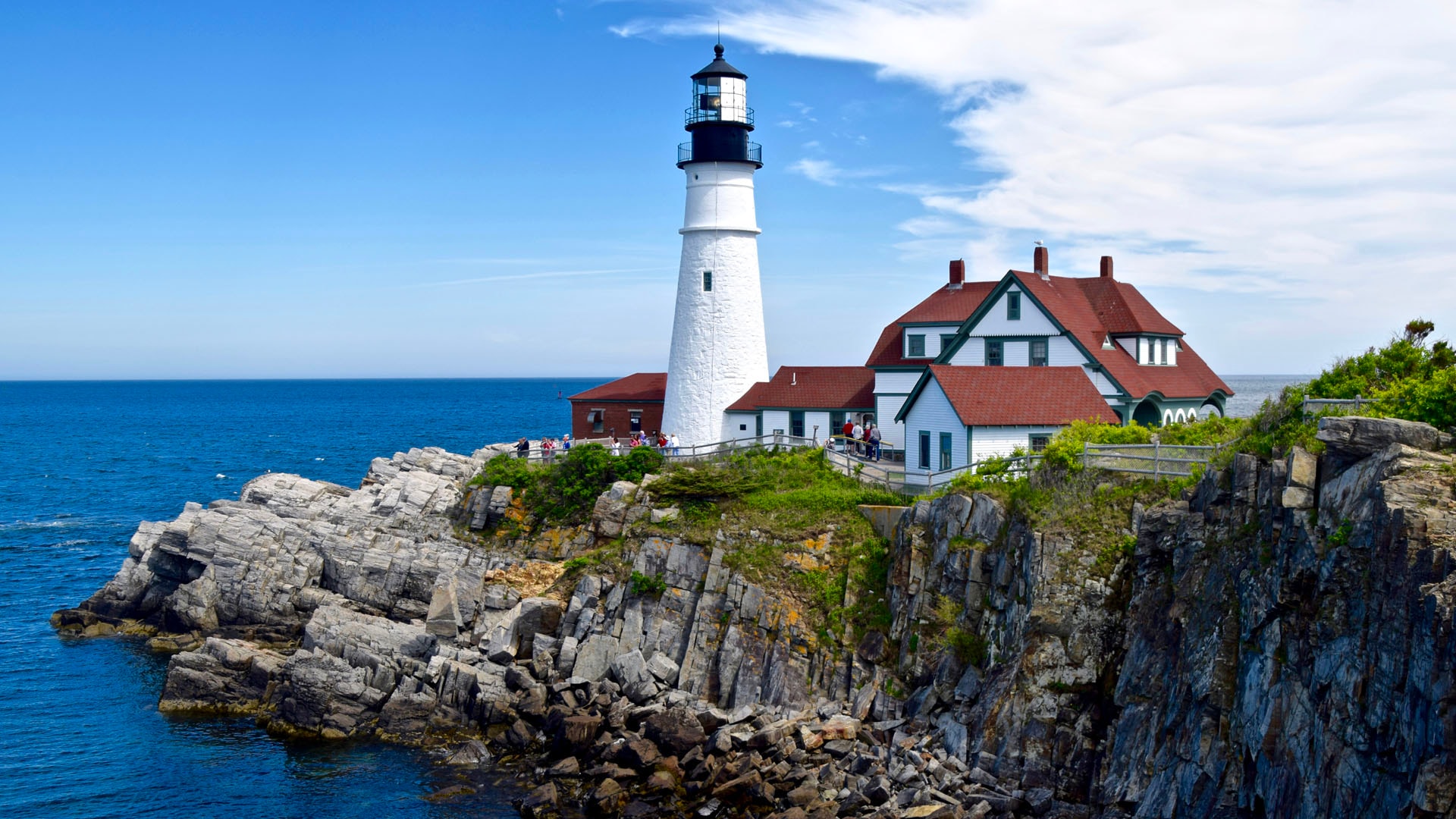 A lovely mug from the Ohr-O’Keefe Museum of Art

Above photo: The Portland Head Light dates back to 1791. It is reportedly the first lighthouse built by the U.S. government.

Story and photos by Susan Hegger

Susan worked for 20 years as an editorial writer and features editor. She is a world traveller and an avid photographer.

The city has grown from a sleepy town to a vibrant destination.

I recognized the house immediately even though I hadn’t seen it in too many decades to admit. To be honest, the two-story frame home where I grew up in Portland, Maine hadn’t changed very much at all. It was painted a different colour and had an addition on the back. But it was still recognizably the place where we built snowmen in the front yard and ice skated in the back.

But the city of Portland? I felt like I was discovering it for the first time. The once sleepy town is still small (roughly 66,000 people), but it now comes across as a hip, dynamic, sophisticated city, with much more diversity than before. The central city is bursting with buzz-worthy restaurants, a vibrant cultural life and trendsetting stores—all easily walkable in a compact urban core.

We couldn’t wait to start exploring so we set off for the heart—or maybe soul—of the city: Commercial Street and the wharfs. There we saw weathered warehouses, battered boats, empty lobster cages, colourful piles of buoys and ropes—in other words, a working harbour, not just a marina for personal watercraft. As we later learned, in the early 1800s, Portland was the sixth biggest port in the country, and that legacy continues. 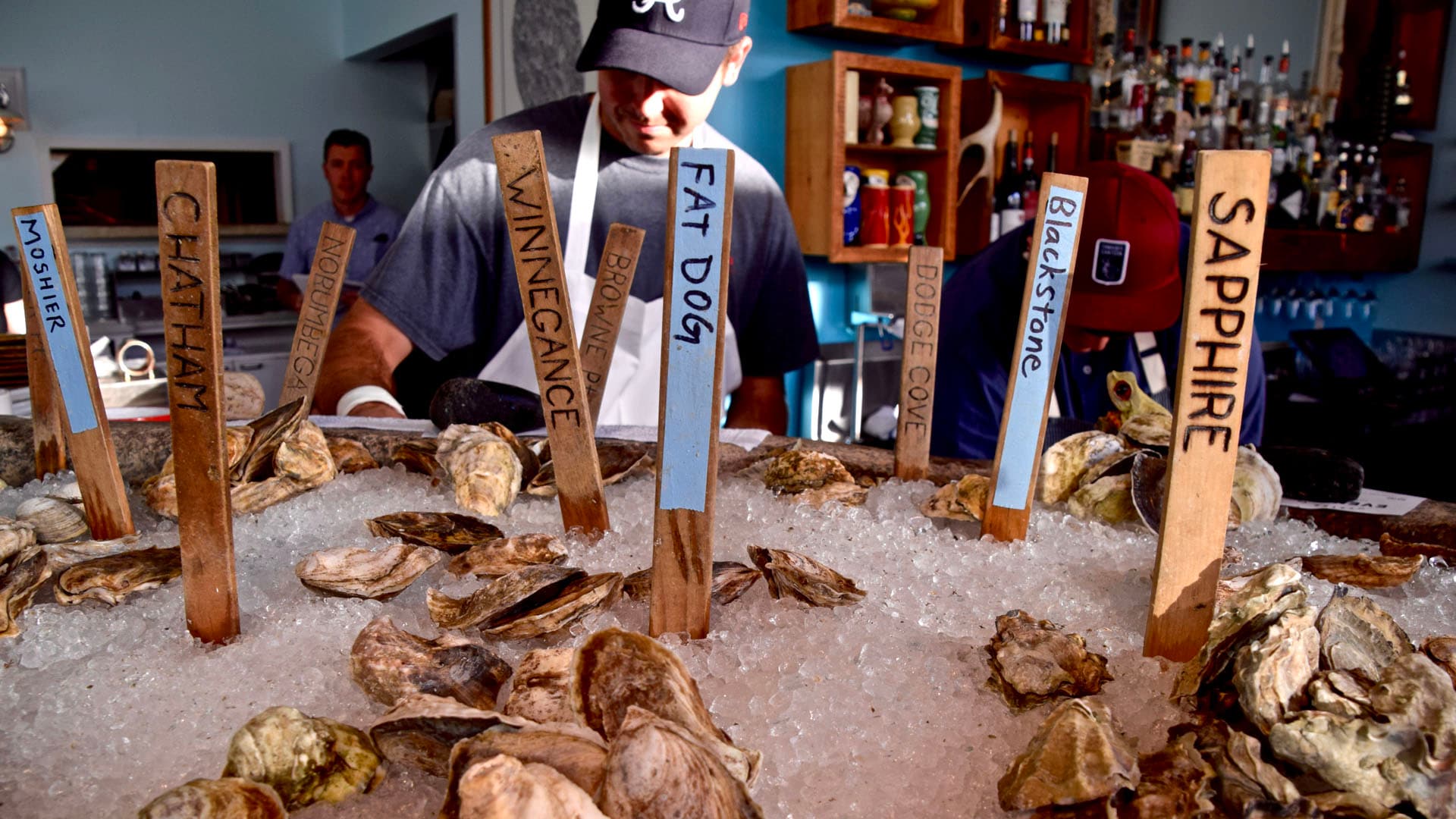 Eventide Oyster Co. is one of Portland's most critically acclaimed restaurants. 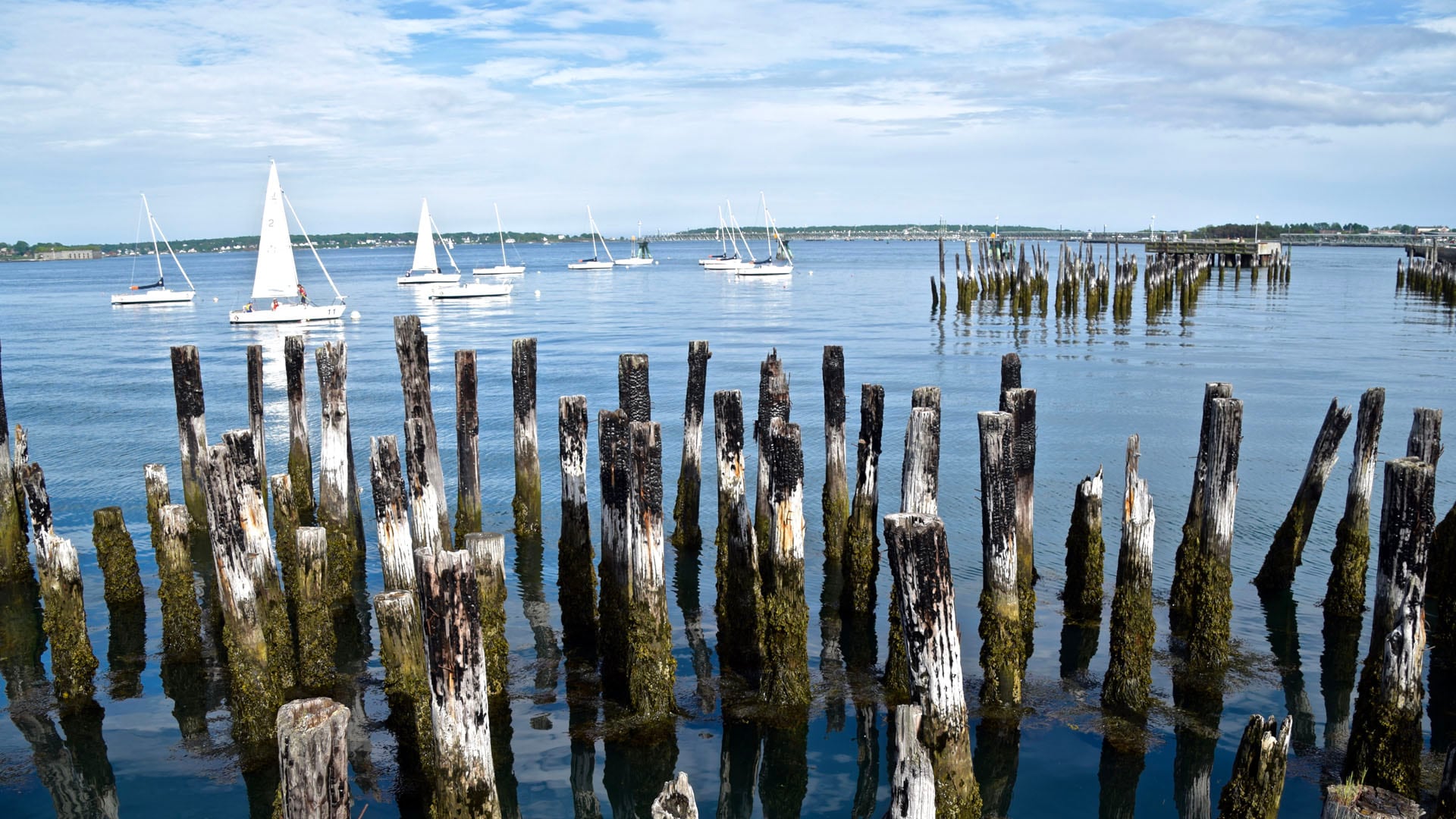 The waterfront trail in the east part of Portland offers splendid ocean and harbour views.

From the wharfs, we wandered into the handsome Old Port area, with its red-brick sidewalks, 19th-century buildings and cobblestone streets. Over the course of our stay, we got to know every inch of Fore Street, one of the Old Port area’s main thoroughfares.

It’s where we found Gorgeous Gelato, a gelateria specializing in intriguing, intense flavours. (Chocolate and fig, anyone? Yes!) And Vena’s Fizz House, a combination bitters boutique and bar that offers alcoholic and nonalcoholic cocktails and concoctions: liquid alchemy, they call it. The aptly named Meadow drink special included gin, basil, grapefruit and lavender. Around the corner on Exchange Street is The Holy Donut, whose not-so-secret ingredient is real Maine mashed potatoes. Go ahead and try the doughnut stuffed with bacon and cheddar.

From the Old Port area, it’s a short stroll to Congress Street, the spine of the downtown arts and culture district in the city’s West End. We spent a pleasant morning in the Portland Museum of Art where we caught the Biennial exhibition, which included more than 25 contemporary artists with special connections to Maine. The museum also owns permanent works by Winslow Homer and Andrew Wyeth.

That night, a First Friday of the month, hundreds of people crowded Congress Street, checking out the galleries, artists and vendors who set up makeshift tables on the sidewalks. Seemingly impromptu performances from street musicians entertained the crowd. Even a troupe of preteen and teenage girls showed off their hip-hop moves. It was a high-spirited street party, perhaps made even more festive by the long sunny evening and balmy (for Maine) temperatures. It felt great to be outside.

In fact, Portland is a fantastic city for being outside and walking during nice weather. We had panoramic vistas of the ocean and harbour—as well as old mansions with their widows’ walks—along the Eastern Promenade park. At the nearby Fort Allen steps, we headed down to a waterfront trail built along an old rail corridor, even passing the Maine Narrow Gauge Railroad. 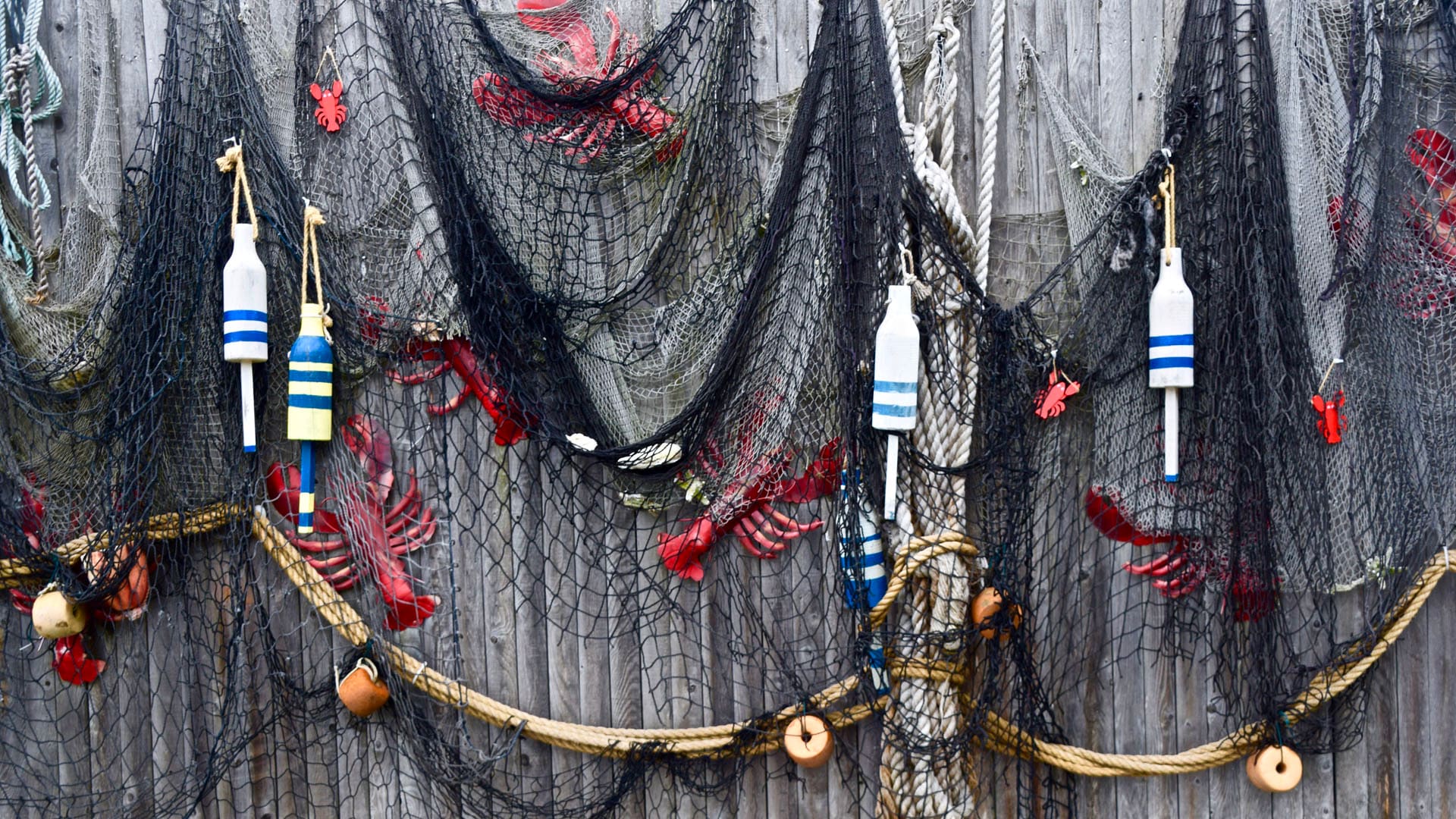 A mural depicting clam diggers decorates a wall in the east end of Portland.

While in the East End, don’t miss the Portland Observatory, originally a marine signal tower built in 1807 on Munjoy Hill. At first, we thought it might be a little hokey, but the observatory turned out to be a highlight. The 360-degree view from the top was well worth the $8 admission, and the docent-led tour about Portland’s history was quite informative. (Did you know that the city was first named Falmouth or that it was ravaged by a fire on Independence Day 1866?)

Of course, we had to take a boat ride and see at least one of the many islands in the bay. There are several different options, ranging from a half day on a mail boat to a standard tourist harbour cruise. For under $4 round trip, we took the public Casco Bay ferry for a 20-minute ride to Peaks Island, known for its quaint village, vacation homes and ocean vistas. Visitors can rent bikes or golf carts to circle the island.

A local shop owner told us the best way to enjoy the island was literally to walk around it, a less than 6-kilometre amble she estimated to take an hour and a half. She also recommended that we look for the 5th Maine Regiment Museum, once a gathering hall for Maine veterans of the Civil War.

The walk was beautiful. We seemed to be there at a perfect time—early June—when the lilacs, columbine, lilies of the valley, irises, azaleas and lupines were all in magnificent bloom.

It wasn’t long before we found the museum. Although it was closed the day we were there, we wandered around the backyard garden overlooking the sea until we met a caretaker. He invited us in and showed us around, pointing out the museum’s most precious treasure: a frayed, faded U.S. flag from the Civil War era. I’d never seen one where the stars were not in rows. 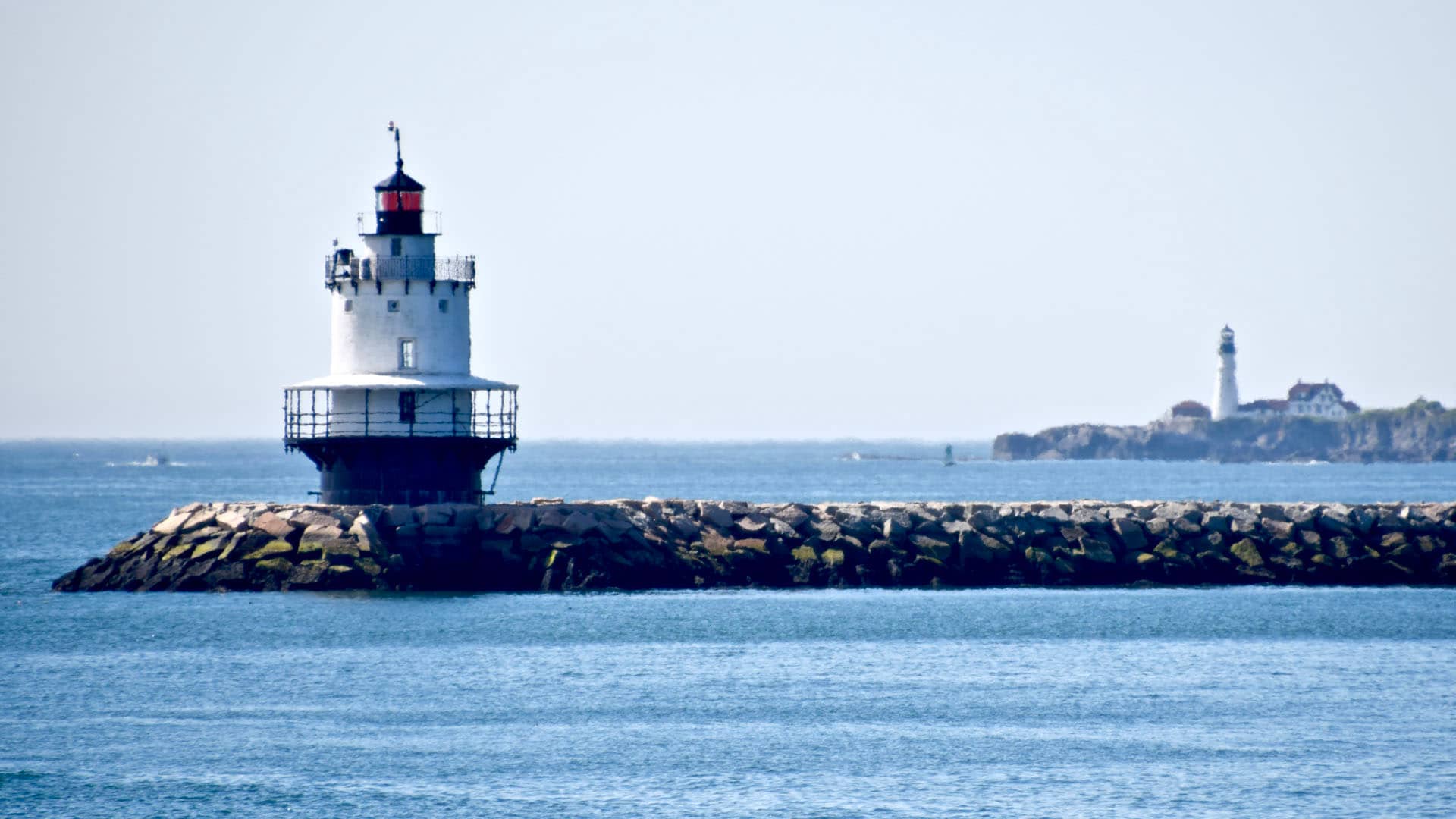 On the ferry ride to Peaks Island, you can see the Spring Point Ledge Lighthouse. 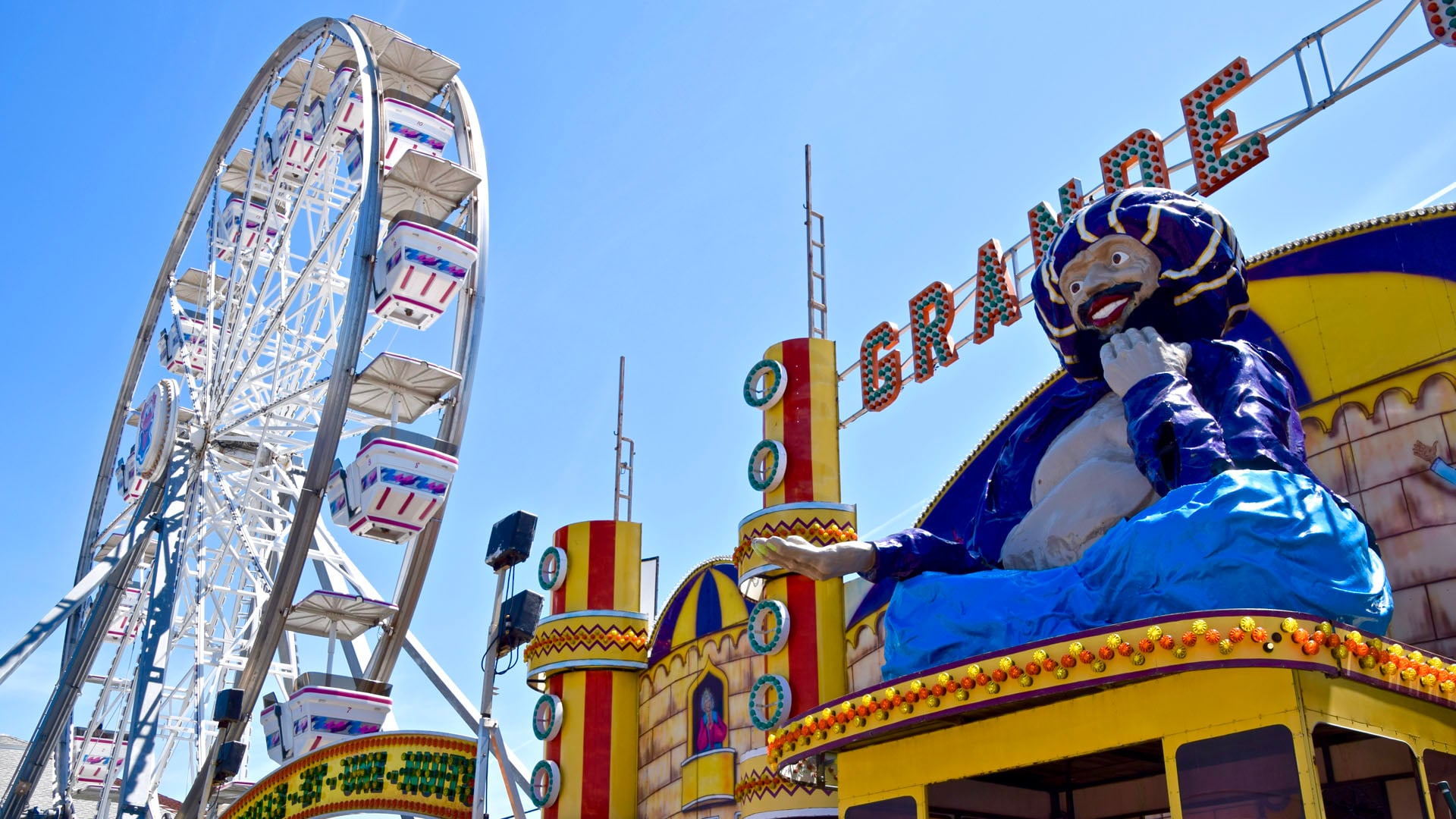 One of the main attractions of Old Orchard Beach is an old-fashioned amusement park.

After our trip to Peaks Island, we drove south from Portland, just a short distance away, to see two iconic spots.

The famous Portland Head Light, in Fort Williams Park in Cape Elizabeth, was completed in 1791 and may be the most photographed lighthouse in the country (and with good reason). Walking paths along the promontory have strategically placed cutouts that virtually scream, “Take your lighthouse photo from here.” So we did. Multiple times. You can also tour the lighthouse and visit the park’s other attractions.

The second spot is more personally iconic: Old Orchard Beach has an 11-kilometre-long beach, and I remember summer days when our family would spread our towels on the beach, and my sisters and I would play in what I now know was absolutely frigid water. It has a pier with souvenir shops and touristy bars. I still have—and cherish—a photo of my dad, my sisters and me in our Easter finery, including heavy coats, with the pier in the background.

But what made—and makes—Old Orchard special is its old-fashioned arcade and amusement park, Palace Playland, which doesn’t look like it has changed one iota although I know that can’t be true. I remember the Ferris wheel, the slow, steady climb upward and the momentary feeling that I was on top of the world.

But as pleasant as my stroll down memory lane was, a visit to Portland is much more than an exercise in nostalgia. Its attractive central city, appealing restaurants, lively cultural scene and easy walkability make it a city that feels both grounded and contemporary. And if that isn’t intoxicating enough, take one deep breath of the salty ocean breezes. 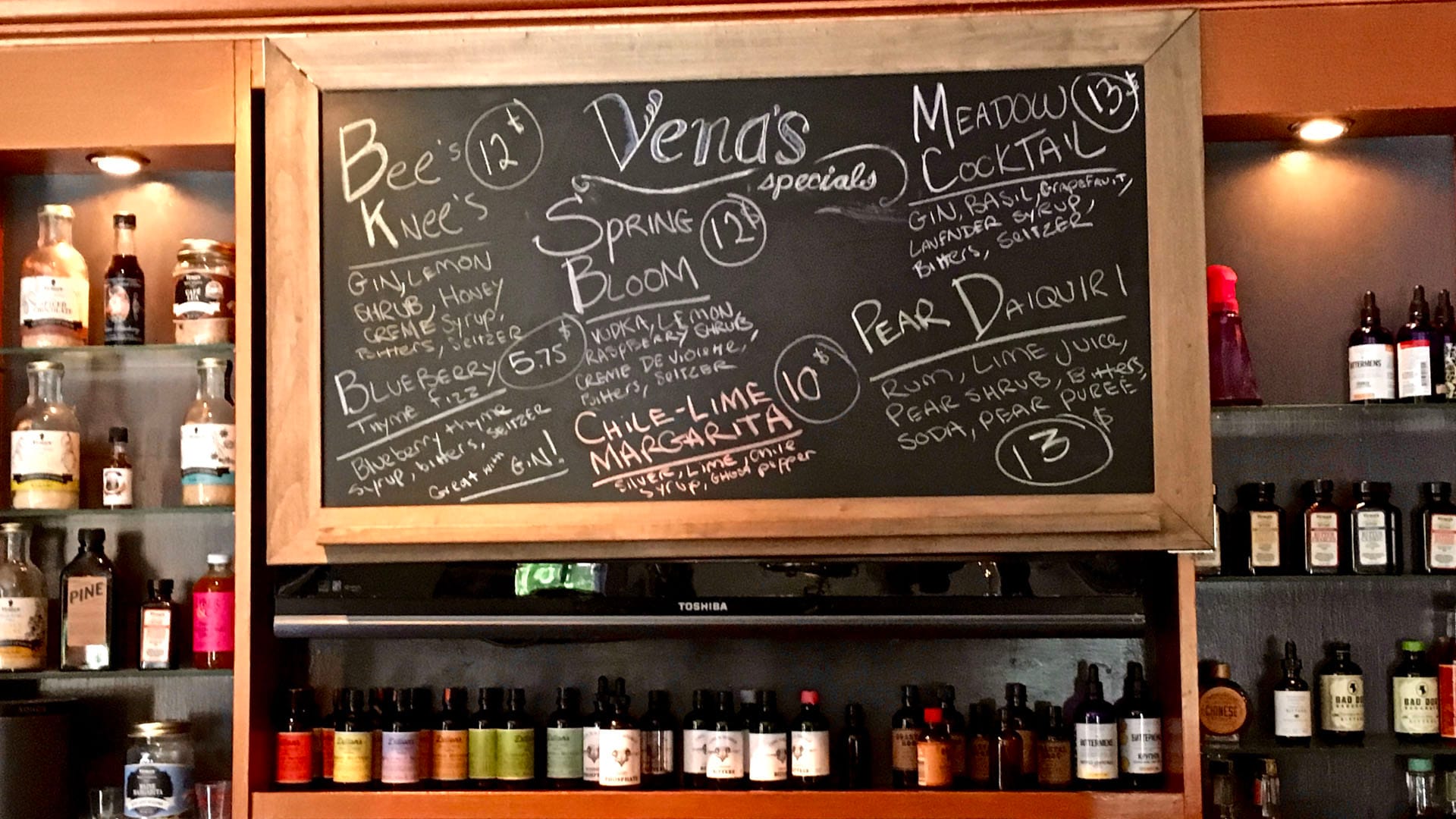 A chalkboard announces the daily specials at Vena's Fizz House.

The only national park in the Northeast has stunning fall scenery and unique carriage roads.

Visit to Portland, Maine Brings Back Memories—and Creates New Ones

The city has grown from a sleepy town to a vibrant destination.

Hike, swim or just enjoy the views on this rural road trip.

In Search of Maine’s Most Delicious Lobster